The King of Castlevania is back with a thrilling and challenging follow-up to his iconic video game series.

There are few names in the video game industry with quite the level of impact as Koji Igarashi. The 52-year-old developer, often referred to simply as “IGA,” is the man primarily responsible for Castlevania (a series so iconic it’s inspired everything from graphic novels to concerts to a recent Netflix adaptation), serving as a programmer, writer, producer and general overseer of the legendary series during his 24 years with Japanese gaming giant Konami.

But after he left the massive entertainment conglomerate in 2014, many gamers were unsure where or when they’d see Igarashi next. Seeing as his last release had been in 2011, some feared that the mastermind could have trouble adapting his signature mixture of platforming, combat and puzzles into modern gaming. Especially since the subgenre of action-adventure games he’d helped create—appropriately titled Metroidvania, a combination of Nintendo’s Metroid series as well as his own—had since fallen out of favor with many of the larger companies that wanted to focus on flashier graphics, sprawling RPGs and addicting shooter games.

Just six months after parting ways with Konami, Igarashi accepted an offer to be one of the founding members of ArtPlay, a new company where he’d be able to make the games he wanted without having to answer to a massive corporation. It’s a move he certainly doesn’t regret—even if it means the budgets are a little tighter these days.

As Igarashi sees it, there are definite trade-offs between working for a large company like Konami and producing games through a smaller outfit such as ArtPlay. While the game developer notes that he did have creative freedom at Konami, the decision-making process could get bogged down in such a large organization. Owning the intellectual property and working with a leaner operation at ArtPlay has led to an efficiency and freedom that Igarashi enjoys—though he does note that Konami’s deep pockets came in handy when an unexpected budget cost popped up or skilled technical support was required. 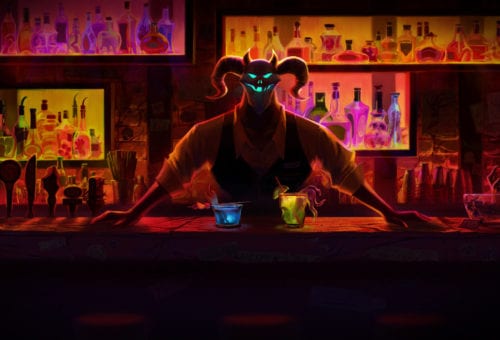 Drinking With Satan: The Hellish Genius of Night School Studio