America’s Magazine served up a big, beefy controversy with its June ’78 cover.

A certain type of feminist, it seems, has always had a beef with pornography, and with HUSTLER in particular. And with its June ’78 issue, America’s Magazine served a heaping helping of beef right back to the self-appointed finger-waggers.

In 1978, HUSTLER underwent a major change. Larry Flynt announced that he had been born again and, in his March ’78 Publisher’s Statement signaled that the magazine would undergo an overhaul in accordance with his spiritual rebirth. (The following issue would see Yippies founding member Paul Krassner take the reins for a brief run as HUSTLER’s Publisher.)

“The changes I’ve instituted will be gradual and will be apparent in the coming months. Chester won’t be a molester anymore; instead he will be an instrument for social commentary,” Flynt wrote.

“However, our most significant change will be in the way we portray women,” Flynt added.

The June ’78 HUSTLER followed up on that statement in a major way with a cover that remains one of the magazine’s most notorious images to this day.

Find this article and more in HUSTLER June 1978 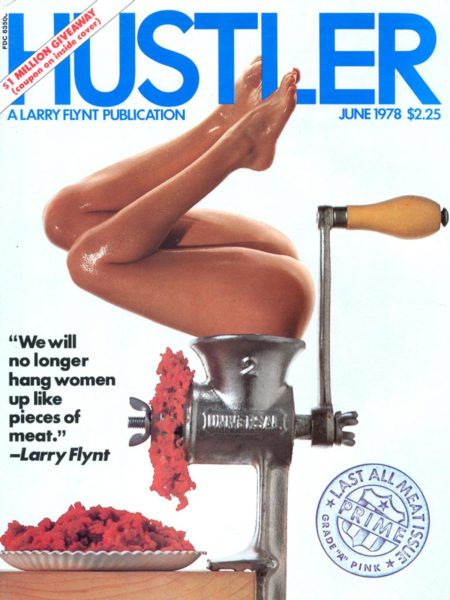