People love to sext and, in a sense, they always have. From the dawn of human communication, Homo sapiens carved pictures of their dicks onto cave walls and, throughout history, the technology to send ostensibly arousing messages has allowed the art form to evolve from crude drawings to poorly lit bathroom selfies.

Inspired by existing research, assistant professor Joe Currin and doctoral student Kassidy Cox of Texas Tech University gathered data from 160 people aged 16 to 69. From the info, the researchers found that two-thirds of people sext for reasons that are not about bumping uglies.

Specifically, Currin and Cox’s study found that the three main motivations for sexting are:

“It was intriguing that two-thirds of the individuals who engaged in sexting did so for non-sexual purposes,” Cox said in a press release. “This may actually be demonstrating that some individuals engage in sexting, but would prefer not to, but do so as a means to either gain affirmation about their relationship, relieve anxiety or get something tangible—non-sexual—in return.”

HUSTLERMagazine.com was also plenty intrigued by this baffling yet apparently rampant practice, so we put on our lab coats and condoms and dove deep for answers. 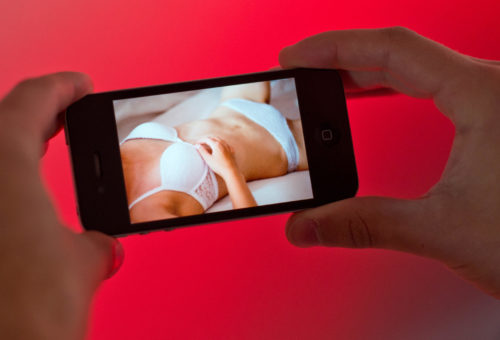