HUSTLER has had no shortage of legal entanglements since it first began publishing in 1974. In 1977, America’s Magazine took its brushes with the law to a whole new level, spending an entire issue behind bars.

The May ’77 HUSTLER—dubbed the Special Prison Issue—was a months-in-the-works project that took an interesting twist when, as it made its way to print, HUSTLER Publisher Larry Flynt was convicted of pandering obscenity and engaging in organized crime for publishing HUSTLER. The conviction was later overturned, but such was the timing of the issue’s publication that Flynt wrote his Publisher’s Statement from a Cincinnati jail cell. Facing a maximum of 25 years behind bars, Flynt remained resolute, his lawyers’ advice be damned:

“In an effort to free me from jail, my attorneys have asked me to remain silent. I was asked not to criticize the prosecutor or judge and to abide by the court’s request not to distribute HUSTLER in Cincinnati. I believe I have the freedom to say what I feel, even if it concerns a judge or a prosecutor. And as far as the court’s request to stop distributing the magazine goes, to go along with that would be participating in the ugliest form of censorship: prior restraint.”

Find this article and more in HUSTLER May 1977 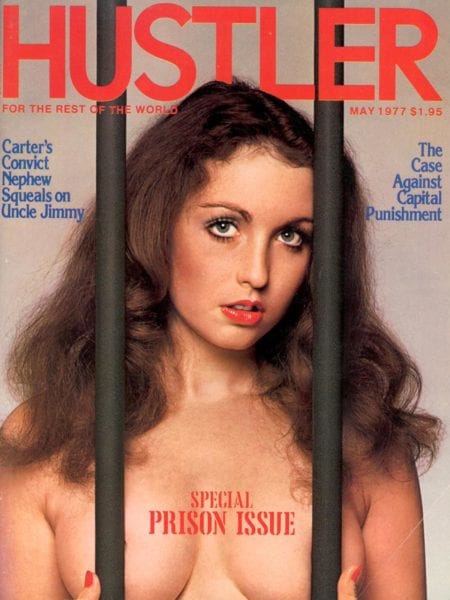