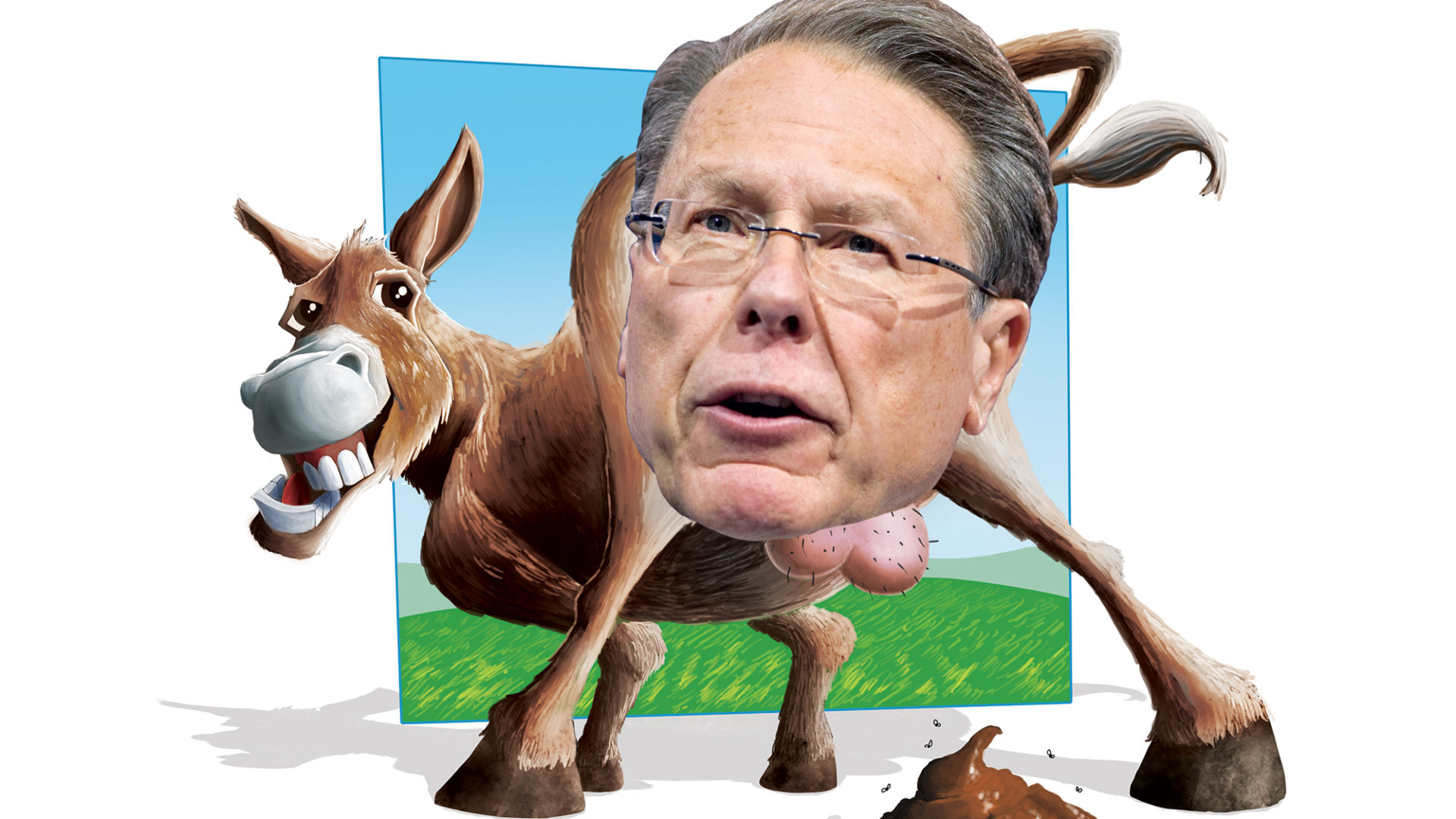 Like dogs, there are many different breeds of Assholes in the world: your garden-variety barkers, mangy kleptocrats and, worst of all, rabid pit bulls. Wayne LaPierre, longtime CEO of America’s most powerful nonprofit organization, the National Rifle Association, is the latter breed of Asshole.

Gun owners, before you get your camo panties in a wad and use this page for target practice, let’s get something straight— we are not antigun or anti-Second Amendment. The Founding Fathers wisely placed the Second Amendment right after the First, as a bulwark against tyranny and for the inalienable right of survival and self-defense. But for over 80 years now, we’ve regulated our citizen “militia” with prohibitions against ownership of fully automatic firearms, grenades, bazookas and other military weapons. In fact, if Jefferson, Madison and company could witness the weekly gun carnage we now endure, no doubt they would say, “For God’s sake, get your damn heads out of your asses and honor the well-regulated part of our Amendment!”

For most of the NRA’s 147-year history (established 1871), the organization was a reasonable, grassroots, public-interest group advocating mainly for hunters and environmental conservation. But after the passage of the Gun Control Act of 1968 and the shooting of a longtime NRA member by Alcohol, Tobacco and Firearms agents in 1971, the NRA began to radically shift its stance. Since 1991, Wayne LaPierre has led the no-holds-barred fight against any and all new gun regulations, no matter how reasonable and nonthreatening to gun owners, turning the NRA into his personal army of paranoid fanatics. He’s the Marjoe Gortner/Jim Bakker evangelist of the gun world, promising eternal damnation if his flock ever stops stuffing his bulging pockets with more loot. The solicitations are endless. During the 2016 election cycle, the NRA spent over $35 million in lobbying, $50 million total, more than any other U.S. nonprofit. Trump got about $30 million of it, so we can thank the NRA for abetting that national disaster.

According to Richard Feldman, a former NRA political director and author of Ricochet: Confessions of a Gun Lobbyist, LaPierre has been propped up as the virtual dictator of the NRA by the Oklahoma City-based advertising and PR agency Ackerman McQueen. “With advertising, they made him a rock star within the gun community,” says Feldman. It’s all less about policy, he asserts, than raising funds to pay the “exorbitant” salaries of LaPierre and other top NRA staff. LaPierre has been paid an average of $1 million annually for years now. In 2015 he set a record, raking in over $5 million with a deferred compensation plan.