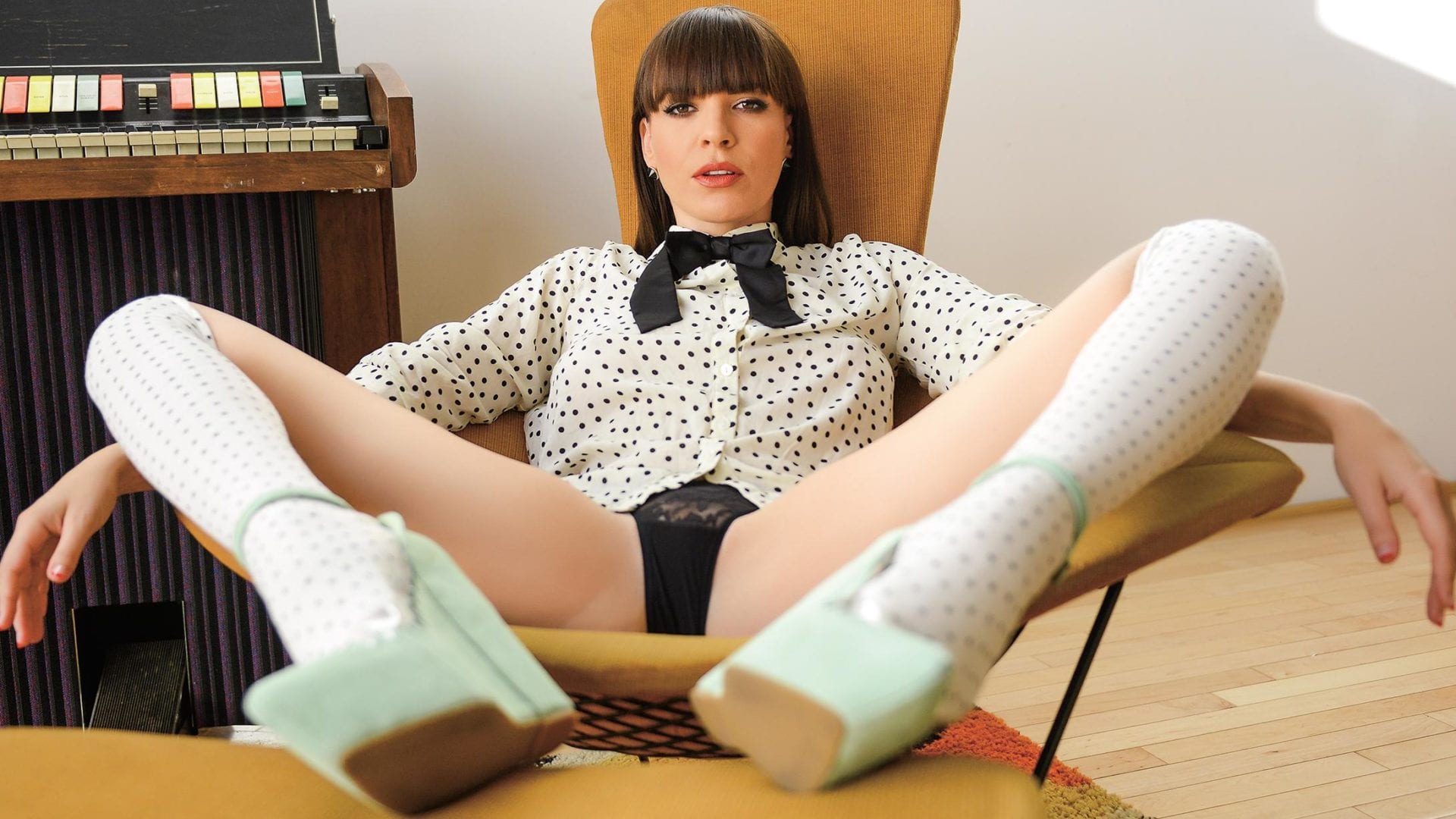 Are you still doing as much hardcore as you always did?

I did a DP yesterday.

You became a specialist for those.

Why do you do those?

Because I’m good at it. And I like it.

By DP you mean double penetration. There was a penis in your butt and your vagina.

Butt and vagina. It’s deceptively easy. Really all you have to do is stay put. It’s less actual thigh work. You just maybe bear down a little bit, but you don’t really have the frantic pumping and hopping up and down. You just do a cowgirl and a reverse cowgirl or maybe a standing. The guy is holding you up and all you have to do is hang on.

I highly recommend it if you can get away with it. I don’t endorse anybody doing DPs. All the DPs should be just for me.

I don’t think so.

Never had any injuries or mishaps?

No. I do get concerned that maybe I’ll stab somebody in the leg with a high heel. But other than that, I don’t think it’s dangerous.

Is that what people think of it?

Just because the anus isn’t necessarily built for that.

I think mine is. It’s like a second vagina.

If you decide to become a performer, you’re probably on a different level sexually. You have different fantasies that might include being gangbanged or double-penetrated or all of these different scenarios that would not be very practical in real life. I have a fairly normal daily life that’s not very pornographic.

You don’t have to have sex all of the time?

If I had brought condoms with me, would you have sex with me right now?

That’s not the right answer.

I’m sorry. I rarely have sex with anybody.

Do you have a boyfriend now?

Not all the time. He’s pretty private about our relationship.

When he sees you in a movie, is he like, “I want to do that too? It’s not fair that somebody else gets to do that.”

He’s never ever seen any of my work.

I know. That’s where everybody rolls their eyes and says that’s mathematically impossible, but he hasn’t.

Does he know about the Internet yet?

No. I consider myself a performance artist and an actress, and every single scene is its own moment in time in a unique scenario, and I’m very present in the moment and I want to make sure that not only am I happy and comfortable, but my scene partners are happy and comfortable and the people producing the content are getting what they want. That probably explains why I still work so much after ten years.

When you have an orgasm in a movie, is it real?

It feels real to me.

But is it real?

Are you less sensitive or more sensitive?

I’m more in tune with my body than ever. I’m a fully grown adult woman, and I’ve experienced a lot generally. It just helps to know your body. You’re probably not sick of having sex. It probably still feels good every time and you’re maybe a few years older than me.

It’s all of it. It is very dependent on the moment because I’ve learned to control my muscles and have repetitive contractions that could also force you to orgasm. If you’re using a lot of your lower body muscles, which is the biggest muscle group in your body, you’re doing something that’s very intense in this part of your body where all of the energy is going toward your sex organs. I guess you can force your body to orgasm from that.

I’ve known people who say they’ve trained themselves to orgasm from being spanked or biting down on a stick or gag or something. This one girl said that she could get off from being punched in the butt cheeks, from the repetitive pressure. I think a lot of people just assume if you do porn you’re shutting your brain off because you’re just waiting for it to be over, but if you’re very present in the moment, you can train your body to be very accepting of a lot of things like big black dicks or whatever. Things that don’t seem like they would fit.

So what’s the meaning of life?

Oh, gosh. Depends on your life, I guess.

What’s the meaning of your life?

Life is very complex and to sum it up in a few words would not be very meaningful.

Okay. There are many parallel realities.

Is this theoretical physics?

Oooh. What would I never do? Maybe I’m a criminal or something.

You’re already pretty close to criminal in this reality. A lot of people consider pornography a criminal activity.

If you look at me though, I look like a housewife.

And I don’t have a rap sheet or anything.

You never did a crime?

You don’t have a record? No mugshots of you floating around?

Nope. I’m a pretty responsible citizen. I pay taxes and I vote and I frame photographs. I don’t scrapbook; I’m not an insane person.

Does Bizarro Dana go to church?

Eww, that thought didn’t even cross my mind. That doesn’t even exist in my world. Maybe she would be like a Lutheran or something.

There are. Weird. Or not.

Maybe Southern Baptist. Or like one of those snake-charmer kind of churches where they speak in tongues.

That would be a good piece of performance art. Now, if you were a man…

You can’t be Mark Zuckerberg as a female?

Do you know any female Mark Zuckerbergs?

There’s that woman who does eBay.

Yes. Maybe I’m not cunty enough to be the female Mark Zuckerberg, but you get my point.

As somebody who is natural, I feel like I set a healthy standard for the feminine-body archetype. That would be my answer to somebody saying that I’m presenting some kind of a false ideal image. I think I promote a healthy body image and a healthy sexual outlook.

What about when some dude is watching you get it in the ass in a movie?

Good for him. Hopefully he paid for it.

Then he gets a girlfriend and he’s like, “You’ve got to let me fuck you in the ass because, look, Dana does it.”

Well, that’s like saying, “I watched a James Bond movie and now I can shoot 30 guys and no blood will come out.” It’s entertainment.

Everyone’s accountable for themselves as adults and that includes their sexuality.

Do you feel sexy right now?

When do you not feel sexy?

They want you to be walking around in Lucite heels.

Those are so bad for your feet.

Penis is not a food. Except for that one guy in Japan that cut his own penis off and served it.

Served it to himself or to people?

Did they eat it?

I think so. I have a pretty wide palate when it comes to food. I like just all the different flavors. I guess it’s indicative of my sexual appetite.

Why do you use your real name?

Because it’s easy to remember.