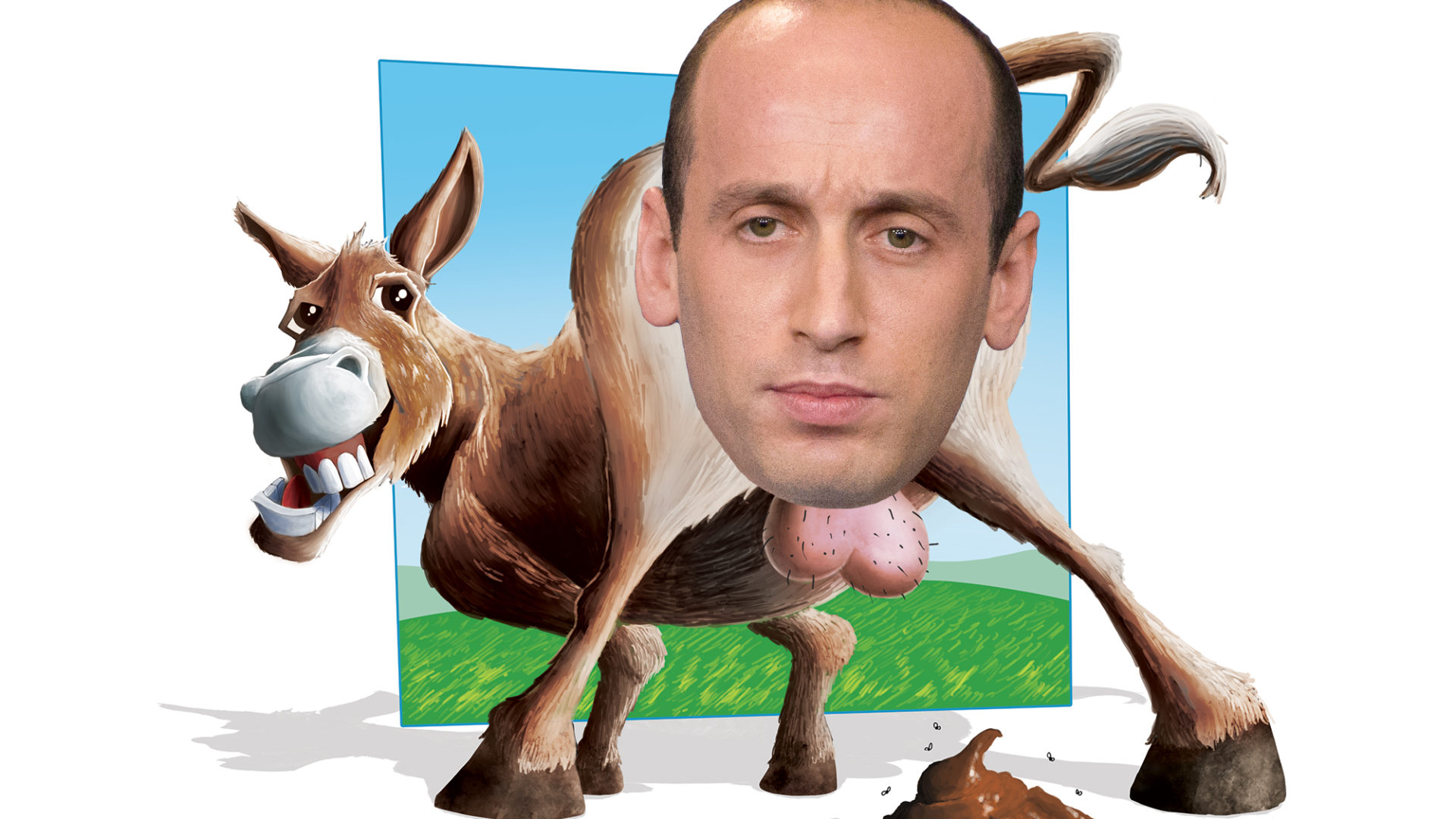 If Ronald Reagan was the Great Communicator, however bankrupt the policies he communicated, Donald Trump is the Great Babbler. With a fifth grader’s vocabulary and the inability to string a coherent sentence together, he really needs all the help he can get communicating to the public. And he hasn’t been helped much by departed clowns Sean Spicer, Anthony “The Mooch” Scaramucci and Sebastian Gorka. Yeah, it’s a tough gig trying to make sense of a leader whose beliefs and tweets flap around like a weather vane in a hurricane.

Trump’s mouthpiece now is 31-year-old wunderkind and grade-A Asshole Stephen Miller, serving as White House senior adviser, spokesman, speechwriter and number-one fanboy. Miller likes to rev up the crowds at Trump rallies before the Big Boss appears, sort of like how Goebbels stoked the goose-steppers before the Führer started ranting. Some even note a resemblance to the Nazi propaganda minister. Actually Miller was raised in a liberal Jewish family. So where did the boy go wrong?

Miller says his conversion happened while in high school, after reading Guns, Crime and Freedom by NRA CEO and executive vice-president Wayne LaPierre— the fanatic who screams “Tyranny!” every time some reasonable gun regulation is proposed. Miller then became, according to several of his ex-classmates, the biggest dick on campus. After 9/11 he complained that fellow students didn’t demonstrate enough outrage: “Osama bin Laden would feel very welcome at Santa Monica High School.” When the neocons exploited that disaster to launch the illegal Iraq war, Miller thumped pom-poms, but didn’t volunteer to fight himself. Instead the sleazy chicken hawk had the nerve to call Ted Kennedy a “traitor” for questioning our despicable use of torture on “enemy combatants.”

Once, during a girl’s track meet, he barged into the race at the end and then bragged how he beat them all even though he “wasn’t even warmed up or anything.” Wow, you’re a real stud, Stevie! He was always complaining about the school announcements being made in English and Spanish, and telling Hispanics to speak English. “[Miller] was an unabashed racist,” says fellow student Charles Gould. “No, I’m not being oversensitive, and no, I’m not using the ‘r’ word where it doesn’t apply. In private conversations he was constantly making disparaging remarks about the African- American, Latino and Asian students at our school.”