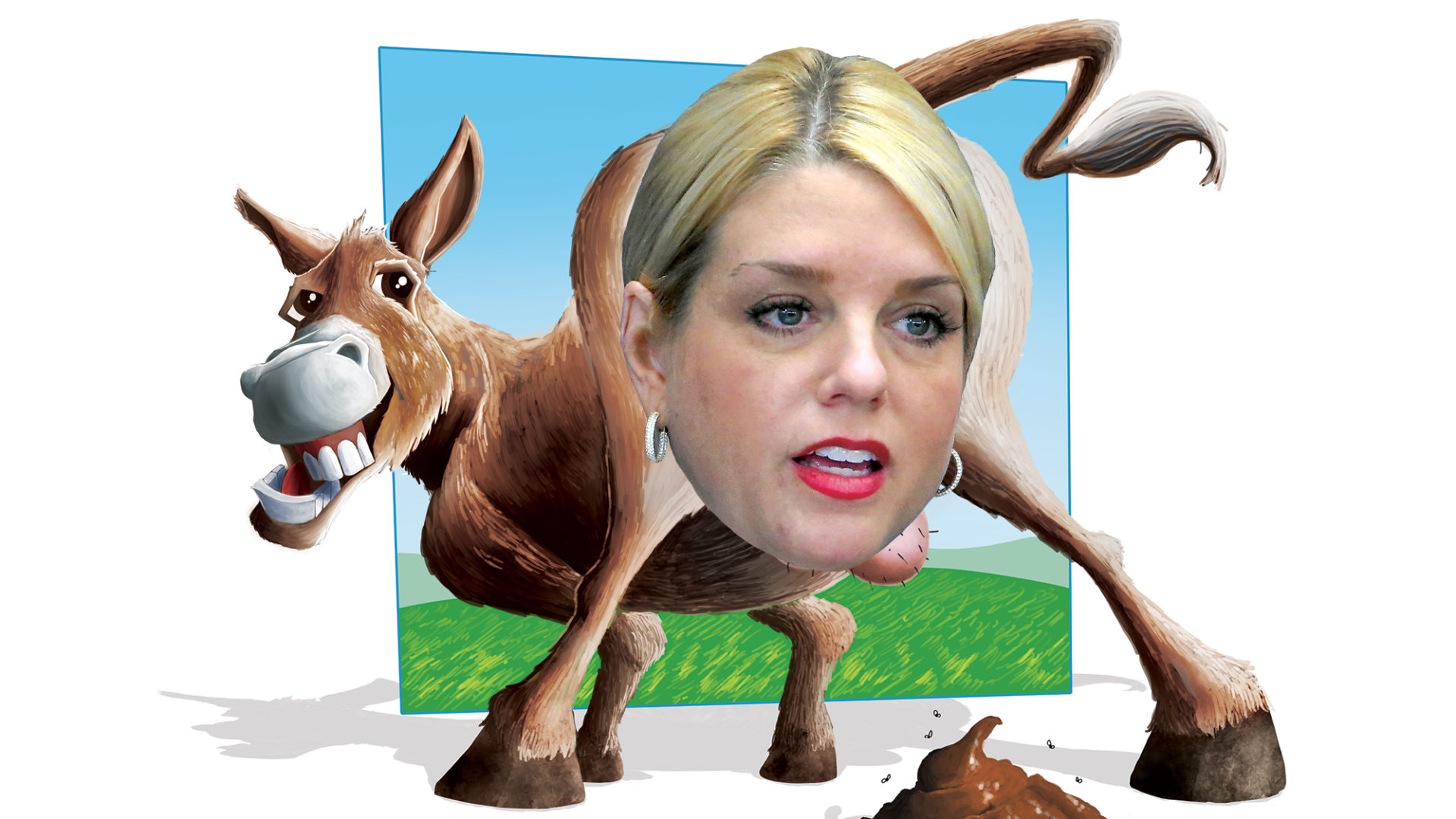 A fresh, new cheerleader has taken center stage on the Donald Trump bandwagon—current Attorney General of Florida and former Fox News legal analyst Pam Bondi. Bondi fleshes out the GOP Blonde Squad, that bevy of attractive gold ilocks girls trying to put a hap py face on The Donald’s deep-seated misogyny and bigotry. We don’t know why they’re all blonde, but this harem does inspire updates to a lot of old jokes: Q: What happens when a GOP blonde gets Alzheimer’s disease? A: Her IQ goes up. Q: What do you call a dozen GOP blondes stacked on top of each other? A: An air mattress. Q: What do the Bermuda Triangle and a GOP blonde have in common? A: They’ve both swallowed a lot of semen.

In Bondi’s case, that means dropping to her knees and sucking up to a whole troopship of corrupt corporate interests in her ambitious climb up the Republican ladder. First and foremost was her kidgloves treatment of Trump University in the Sunshine State. The trouble began when New York Attorney General Eric Schneiderman filed a civil suit against Trump U in August 2013, alleging that 5,000 students had been defrauded out of over $40 million. That money was paid to learn the big secrets of Trump’s real estate success, which students could have gleaned just by reading New York tabloids—lie, cheat and swindle your way to the top! The courses, often held in rented ballrooms, cost $1,495 at the low end and up to $35,000 for the “Gold Elite” program. I’m going to make you great again! Trump promised them all. Only he didn’t. They got the shaft, and Trump got the money—the business model for his entire career.

A lot of Floridians fell victim to this scam. They angrily filed reports with Bondi’s office, forcing her to announce, on September 13, 2013, that she was likely joining the case. But then Pamela Jo began to have second thoughts. She started having them on September 17, four days after the above announcement, which is when a pro-Bondi PAC, And Justice for All, received a $25,000 check from—who else?—Donald Trump. Subsequently she announced that Trump U was off the hook in Florida —she was dropping the case. All this blew up last September, forcing Bondi and her aides to explain that there was only one complaint about Trump U while she was in office, and swearing she just didn’t know about the slew of complaints that had piled up before she started. Bullshit: The New York Schneiderman suit she had reviewed included complaints regarding no less than 827 courses taken by Floridians!