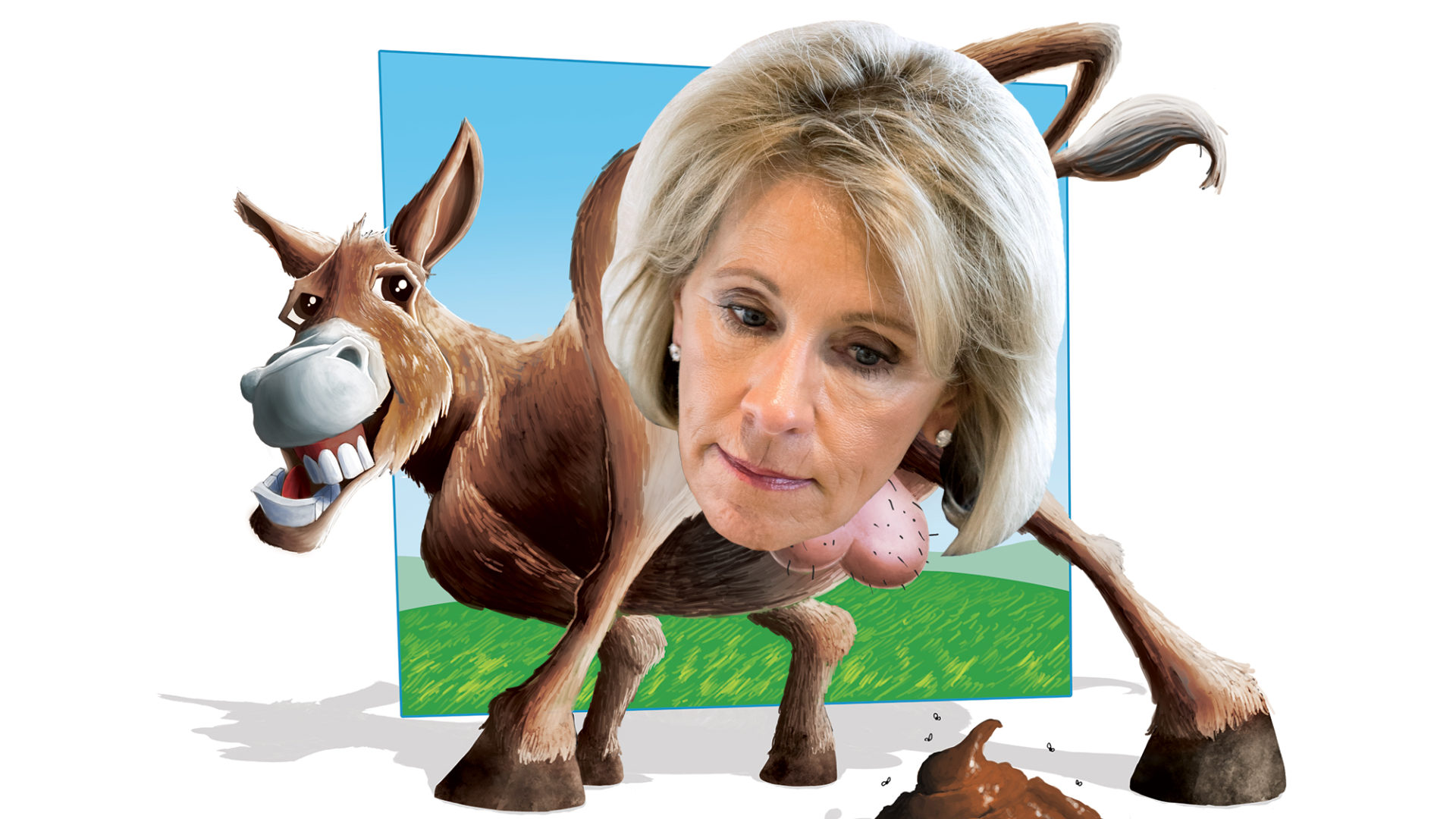 Donald Trump has astounded us with his rogues’ gallery of cabinet appointments. The main qualifications seem to be, one, they should be generally ignorant of the field they will be supervising and, two, they must be filthy rich. Explaining the latter, Trump said, “I want people that made a fortune because now they’re negotiating with you, okay? It’s no different than a great baseball player or a great golfer.”

If you’re having trouble parsing that, you’re not alone—Trump is barely more articulate than George W. Bush. Speaking on a third-grade level seems to be a qualification for Republican Presidents nowadays. At least he hasn’t appointed Curt Schilling as secretary of defense. Two other appointments, however, might as well be former NFL jocks suffering from concussion trauma: Ben Carson as secretary of housing and urban development (because he lives in a house?) and Betsy DeVos as secretary of education.

Ms. DeVos hails from Michigan royalty: Her father, Edgar Prince, is a billionaire auto parts magnate, and her father-in-law, Richard DeVos, is cofounder of Amway. Her brother, Erik Prince, founded the murderous private mercenary force Blackwater USA (now known as Academi). Both families are rightwing Christians and deep-pocket supporters of far right causes. In 2016 alone the DeVoses donated a whopping $14 million to conservative candidates, PACs and Super PACs. Along with the notorious Koch brothers, they fund the National Center for Policy Analysis, Institute for Justice, and the Family Research Council: organizations pushing for Social Security privatization, anti-union right-to-work laws, repeal of the estate tax, gutting of environmental and business regulations, anti-LGBT laws, and “school choice”—all designed to ensure that America’s obese oligarchy keeps getting richer while the rest of us get poorer.

School choice and vouchers are Betsy’s lifelong passion— that’s why Trump chose her. Aside from her stints as Republican National Committeewoman from Michigan and chairwoman of the Michigan Republican Party, her only qualifications are these: She was born rich, and she married rich. Betsy never attended a public school or university. Her four children did not attend public schools. She has no degree in education, no teaching experience and no experience at all in administering any school, either public or private. Her motto might as well be borrowed from Shrub Bush: “Is our children learning?” She does have a huge bank account—none of it earned by her own efforts—and that’s what really gave Trump a hard-on for her. Flash seven figures at him, and Trump gets wood like John C. Holmes.