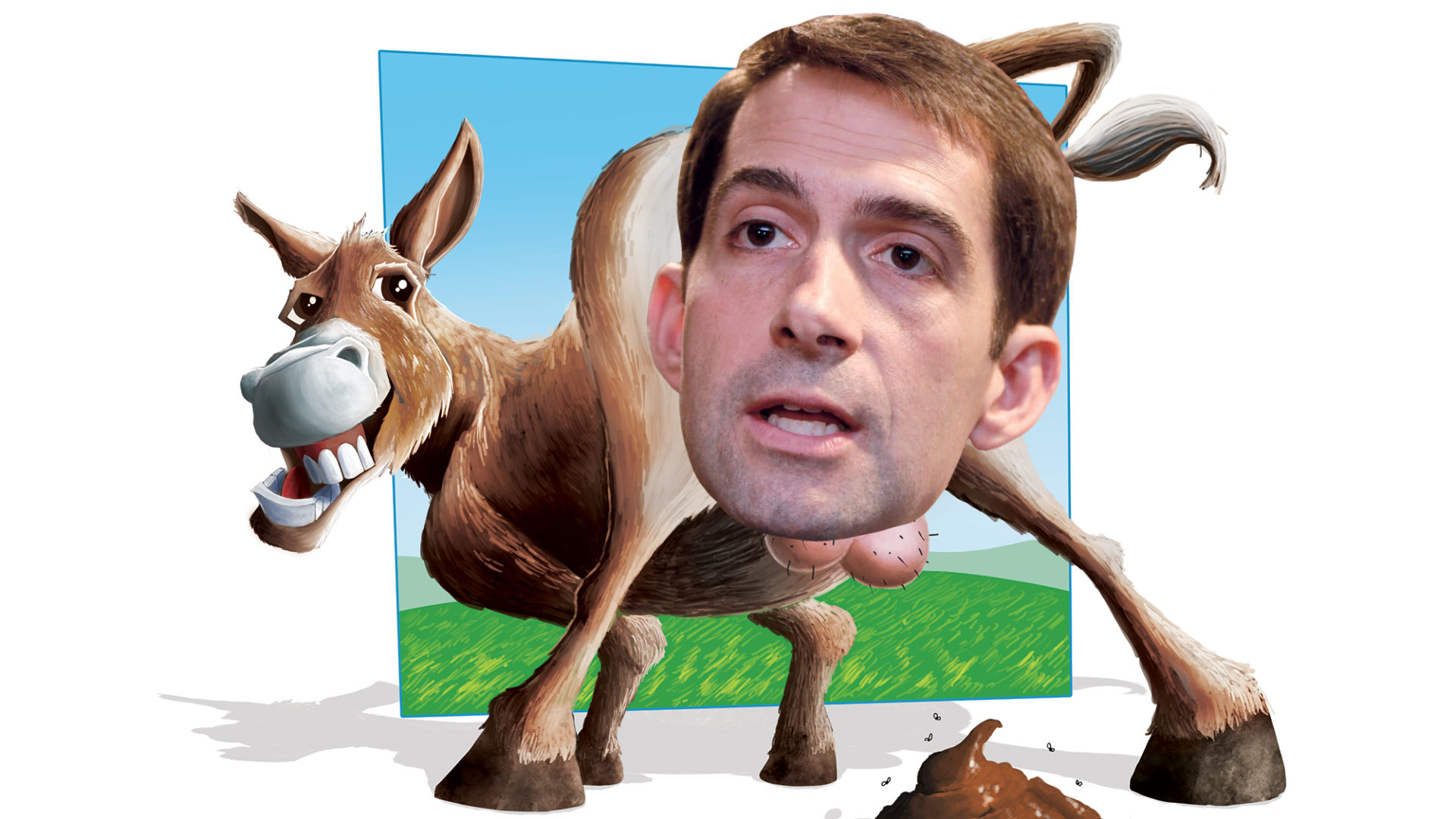 Tom Cotton, the freshman senator from Arkansas, has stormed Capitol Hill like a fire-breathing Godzilla, determined to demolish any moves toward diplomacy, peace and non violent resolution of world conflicts.

The whole Neocon nutball chorus is swooning over him, having finally found somebody besides a craven chickenhawk to beat their war drums. After graduating from Harvard Law School, Cotton served as an Army combat lieutenant in Iraq and Afghanistan, although he spent most of his military career—two years—conducting funerals for fallen soldiers at Arlington National Cemetery. You would think that parade of tragedy might have given him some pause about sending yet more of our guys overseas to fight and die in Arab tribal civil wars. And you would think a Harvard Law degree might have given him some deeper appreciation for the American Constitution and international law. You would be wrong on both counts. Because Tom Cotton is a macho jerk with a dangerous messianic complex. A rigid, uncompromising ideologue with a thirst for conflict. An intolerant, ruthless, ambitious, bloodthirsty asshole of the highest order.

He first rose from obscurity with an open letter from Baghdad to the New York Times in 2006, accusing two Times reporters of treason for their article about a secret Bush Administration program tracking terrorist financing: “…these terrorists do not spring from the soil like Plato’s guardians,” he fumed, “…you have gravely endangered the lives of my soldiers and all other soldiers and innocent Iraqis here.” Try to understand this, Tom: Insurgents fighting an illegal preemptive invasion and occupation on their own soil by foreign military forces are by no stretch of the definition “terrorists.”

While virtually the entire rest of the world recognizes the Iraq invasion as an unmitigated disaster (the “greatest strategic blunder in American history,” according to former general and NSA director William Odom), Cotton still believes, incredibly, that it was “a just and noble war” and that “George Bush largely did have it right.” In what alternate universe could anyone believe George W. Bush got anything at all right in Iraq? Tell you what, Tommy boy, get your hard ass back to Baghdad and tell that to the families of the estimated 150,000 civilians killed by this interminable conflict.

Find this article and more in HUSTLER September 2015